First of all let me point out that I do not plan to have disasters every day…………and this technically is not a disaster………….but you make of it what you will.

After seeing a few of my fellow thermomix users bragging about the nuggets that they have been making – even my sister in law had made them – I thought to myself this will be a quick easy dinner.

The pork rissoles were a piece of cake:

a sprig of thyme, parsley, tarragon, sage and marjoram

Roll into rissole sized balls and refrigerate until ready to be lightly pan fried in frypan.

Well what a total PITA they were to make

Wondering here do you want the recipe first or the story that goes with it.  Lets do the story part first – then you can decide for yourself if you wish to be brave and try the recipe.

So I got the herbs out ready right – wrong – no tarragon, searched everywhere I know I have some but couldn’t find it.  Carry on use parsley and garlic.  Mince garlic and parsley in thermomix – done.  Add 500 g of chicken tenderloin – actually is one kilo but again I divided mix into 2 equal portions.  Mince chicken – piece of cake – love the mincing part of the thermomix.   Repeat method again for second portion and then combine first portion add egg and  in for another quick whizz in thermomix.

Then I need breadcrumbs to coat the nuggets – run down to the freezer to get my premade breadcrumbs that I put away – you’ll never guess what I see right in the very top of the freezer – that dam tarragon – buggar. By this time I had already washed up the thermomix a couple of times well once for the pork rissoles and now just washed up after the chicken so I thought I would just quick squish them up in my hand and sprinkle them over 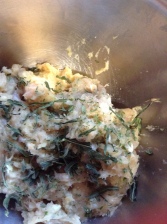 Not very fine is it??

Anyway carry on mixing it up and making an egg wash dish and then a crumbing dish – done. Now this is the not fun part – make little nugget sized balls put in wash and then roll in breadcrumbs – sounds easy.  You think this might be a tad messy – well it is. It’s even worse when you drop a little bit on the floor but your hands are so messy that you think to yourself “Oh I’ll get that bit later” then when you run out of breadcrumbs you turn to get some more and you step your toes fair into that little bit that you’ve just dropped on the floor – but you can’t bend down and wipe it out from between your toes because you’ve got all manner of ingredients all over your hands.  dilemma here do I continue with mush between my toes or do I wash my hands and then clean my toes??? Although it’s tempting to wash your hands at this point because you’d love another slurp of your wine??? I’d love to hear what you think I did.

I found it quite frustrating rolling those little nuggets as many times as I did- but I persevered, but I was knackered at the end so I canned the vegetable idea and made a nice salad instead,some gravy and scoffed a nice glass of wine 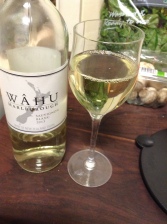 So I cooked up the little buggars and filled the thermoserver completely – cooked the pork rissoles, put it all on the bench and whistled them up for dinner. 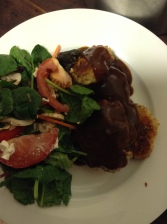 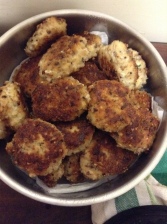 So there you go the proof is in the pudding they must have liked them – I hoped they enjoyed them, because I doubt I will make them again

add chicken speed 7, 6 seconds – you want a finer mix than the pork rissoles

put both portions together and add egg give another quick whizz

make and egg wash with an egg and some milk

and a dish with breadcrumbs

roll small nugget sized balls then put in egg wash then roll in breadcrumbs – do this 47000 times and try not to drop any on the floor – and here’s the thing – you can’t drink wine whilst you do this because your hands are sooooo sticky and gooey – so by the time you’ve finished rolling you are really desperate for a drop.

Fry in shallow fry pan and then put into thermoserver to keep warm whilst you drink a bit more wine… and hollar for the family to come to dinner.

I’ll try to perfect my recipe presentation for future but it’s late and I think I’ve had too much wine.

The Mixed Up Thermo Lady

The Mixed Up Thermo Lady